There are three parts to this week’s message – I hope you have the time, inclination and the patience… 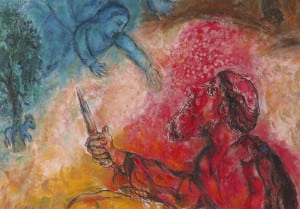 1.     In this week’s Torah reading there are two very significant narratives which predominate. The best known story is Akedat Yitzchak. This is the section we read on Rosh HaShanah. It is the story of God’s call to Abraham to sacrifice his beloved son, Isaac. Abraham, as we have learned, is willing to do so. Historically there have been so many commentaries on this section, on Abraham’s decision. And the predominant reading is that it was a sign of Abraham’s loyalty, it reflected the depth of his faith and subservience to God. And although there are lots of apologetics which speak of its historical context, and the fact that at the end of the story God provides the ram and the boy is saved, the story is the story and Abraham’s acquiescence is clear. That is the plain reading of the story.

But there is also another dimension of Abraham and of God that is reflected in a different story in the parshah. You probably know this one also. For some reason, God wants to tell Abraham of His plan to destroy the evil cities of Sodom and Gemmorrah. Abraham enters into a negotiation with God. What if there are fifty decent people? What if there are forty five? On and on they go until they reach ten! It turns out that there aren’t even ten and the cities are destroyed. There are two factors to think about here. One is that God, for some reason, has a “need” to share with Abraham what He is about to do. The other is that God enters into a negotiation. And in this negotiation, Abraham is the voice for life, compassion and humanity. It’s a really important story. In some ways these two stories need to balance each other. There is the man of faith and submission  and there is the man of reason with a  conscience and a conscious morality who is willing to stand up for people, and even argue and protest against God.

Sometimes systems of authority need to be challenged. Sometimes what was always considered to be the “right way” is no longer. The question is, what do human beings need to do to have the authority to question the status quo and to protest the accepted ways of being. It’s not an eeasy question and there are no easy answers. I believe that we hold that people must be engaged in learning and dialogue. We must understand the ways that the past informs our present, and we must be involved in the reading and learning and conversations that hone our sensitivities to values. Out of that, often new directions and clearer paths emerge.

2.     We are about to collectively remember the assassination and the death of Prime Minister Rabin. The event took place twenty years ago, November 4th.. When Rabin died, a hero was lost. As you know, Yizchak Rabin was an outstanding soldier in the War of Independence, continued to be a military hero, and became an important political leader in Israel and a statesman in the world. He was a man of deep conviction and great courage. Rabin was a new generation Israeli. He represented both the new-found strength of the Jewish people and its capacity to be practical. He lived to fulfill a vision of its ideals as articulated by the founders of modern Zionism and the Jewish State. Perhaps his greatest strength was that he was able to move from being a warrior in battle to a warrior for peace. He trusted Israel’s strength enough to be willing to take some risks for peace. But he was not willing to forego Israel’s security.

We often ask the question: What if? In retrospect we can only conjecture. I know there are people who believe very different things about this question.

I was in Israel shortly before that election when Rabin was assassinated. I was so deeply disturbed by the nature of the campaigning for Prime Minister. I remember the posters which depicted Rabin as an enemy, a member of the PLO or, worse yet, posters which depicted him as a Nazi. At the time, I was not fully aware of the Jews who were doing this. I didn’t realize how important they would become in Israel’s future. I came home and spoke about the responsibility of leadership when these types of expressions become public. How disappointed I was then, that Rabin’s opposition did not condemn these hateful expressions and how dangerous they were.

We know when mistruths go unchecked they become perceived as truth. We know that expressions of hatred that go unchecked lead to more hatred and violence. This is why strong and aspirational leadership is as important today as ever. The world is in desperate need of a new direction. And it will begin with a willingness for leaders to articulate the hopes and dreams of people.

After the horrors and the terror of the past few weeks, few feel hopeful about Israel. Sadly, hope is another victim of violence and terror and fear. And sadly, ideologies have replaced practicality and the immediate has replaced concerns for the long term.

This week we will remember Prime Minister Yitzchak Rabin, gunned down in his desire to create a better future for Israel and the world; in his pursuit of a dream. We sanctify his memory and pray for his soul.

3.     I hope to go with many of you to Israel this summer to study at the Shalom Hartman Institute. I know that this can be one of the great intellectual and most thought-provoking experiences of your life. Please contact me or elaine.siegell@bnai-torah.org for more information.

I’ll see you on Shabbat and hopefully on Sunday at our Mitzvah Day. Summer Faerman and a host of people have put together what may be the best Mitzvah Day in the history of the world!!!

See you in shul.

Shabbat Shalom,
Rabbi David Steinhardt
This column is dedicated to the memory of Rubin Shafran z”l